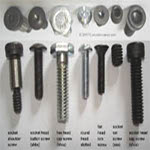 The most common thread types are the inch-based Unified coarse / fine (UNC/UNF) and metric coarse / fine. Other types and their purposes are described at the end of this section.

Coarse or Fine? To oversimplify, use a coarse thread unless you’re tapping into sheet metal. The differences are:

* a -LH at the end of either inch or metric threads indicates Left Handed threading.
* a (22) or other number at the end refers to the ANSI series of threads.

Some history and info about other threads:

In 1949, Canada, the United Kingdom, and the US agreed to a Unified thread that is largely the same as the American National thread that came before it, and screws from both systems are interchangeable. The new Unified system bascially added more manufacturing tolerances and tweaked some other ones. See ANSI/ASME B1.1 -1989 (R2001) for details.

Metric threads are specified in ANSI B1.13M-1982 (R1995), which is very nearly equivalent to the original ISO 68 specification.

Camera mount threads: These are generally a coarser old standard called the “Whitworth” 1/4 inch diameter and 20 threads per inch.

UNJ or MJ: These threads are used in situations where fasteners must withstand high fatigue stress, predominantely the aerospace industry. The basic difference between UNJ and UN is a larger root radius. Avoidance of sharp corners is critical for fatigue resistance. The root is given a large enough radius that it could potentially interfere with a typical UN internal thread, so there are both external and internal UNJ threads (and MJ’s). According to Blake, it is statistically highly likely that an external UNJ thread will fit a regular internal UN thread.

Standards: In general, the geometry is definied by ANSI, ASME and the ISO, while material strength properties are defined by ASTM, IFI, SAE and ISO.

Cut vs. Rolled Threads: This refers to how threads are manufactured. Rolled threads are stronger than cut/ground threads because they are strain hardened when they are made, and the internal grains of the metal are not cut. The Unified standard doesn’t demand that the roots (vallies) of external threads be rounded, but just about all fasteners less than 1″ come that way because their threads are rolled (see Blake book ref. above), and rolling produces rounded roots.

Constant pitch series: This refers to the many series of threads where the pitch does not increase with diameter. The 8-UN (8 threads / inch) series is apparently very popular above 1″ diameter fasteners. Typically these are used for adjustment devices and not fasteners.

Power Screws and ACME Threads: Power screws’ job is to translate rotational motion into linear motion. Because of this, efficiency is a concern, and the 60 degree thread profile in standard fasteners is unsuited. The most efficient thread would be square with 90 degree angles, but this is difficult to manufacture, so the ACME thread is used (this has a 15.5 degree angle between root floor and tooth wall). Why is square more efficient? None of its force goes into pushing outward, whereas a 60 degree thread has a substantial force component away from the axial direction of the screw.

There are numerous standards that fasteners are manufactured to, and those standards describe everything from material chemistry to surface finish to heat treatment. The most relevant numbers are “Proof Stress,” “Yield Stress” and “Tensile / Ultimate Stress.” Tensile Strength is how much stress the material can withstand before finally ripping apart. Yield Stress is the amount of stress that a material can undergo before permanently stretching. Proof stress is similar to Yield stress except that it is slightly less (about 90%), and only applies to fasteners. The thread geometry causes them to yield slightly before the Yield stress level of the material, so Proof Stress can be thought of the true yield–in other words, the fastener will behave like a spring below that stress level.

So which of these numbers should be used? While there are many arguments for tightening a screw past its yield point (for instance), from this author’s viewpoint, if an external load yields a screw, and if that load is ever removed, the screw will now be permanently stretched and loose. Therefore, we recommend designing so that the combined internal and external loads stay below the proof stress to avoid any possibility of yielding. If proof stress is unknown, 85% of Yield stress can be used as an approximation. The ultimate or tensile stress is sometimes designed to, but we do not know when this acceptable or not. Also, the ultimate stress is used in designing joints for alternating loads, but this is beyond our scope.

Several organizations publish standards for fasteners. For inch/english, this includes SAE, ASTM, ANSI, ASME and others, although the most commonly used are the SAE “Grades.”(standard J429). The most common metric specifications are published by the ISO. (ANSI metric specs agree with ISO for all practical purposes–Machinery’s Handbook)

Socket Head Cap Screws made from alloy steel are typically manufactured to a higher strength than SAE Grade 8: 180 ksi tensile strength for fasteners up to 1/2 inch, 170 ksi for larger sizes (ASTM A574, p. G-34).

For many more head markings and their corresponding specifications, see here.

Metric fasteners are marked with two numbers separated by a decimal point, like 10.9. The 10 is 1/100 of tensile strength in MPa, and the .9 represents the ratio of yield to tensile strength. So 10.9 represents a tensile strength of 1000 MPa and yield of 900 MPa. Some strengths are stronger than this method shows, see table 10 on this page. Other references for this table: here and here.

*these value aren’t necessarily from the standards, they’re calculated as described above.

For applications where there is any chance of bodily or property harm, don’t rely on our external load estimates–they are intended to give a rough approximation of what screws of various grades can hold in non-critical applications, and are based on the following assumptions:

Inch tensile areas and loads (in lbs), both fine and coarse thread

Nut and tapped hole strength – How much thread engagement is needed?

If a screw / bolt fails because the threads strip, it can be hard to detect both during installation and later because the threads will still have some grip on the screw. If the bolt breaks, however, it will be completely loose, be easy to detect and remove, and usually fail during installation when additional torsional loads are present (torsional loads usually dissipate within minutes after tightening if you’re wondering why we didn’t take them into account before). Because of this, fasteners are designed to fail in the bolt, not the threads, so most nuts are more than adequate–just make sure you use a similar grade of nut compared to the screw.

How much thread engagement is needed in a tapped hole, then? According to “Fundamentals of Machine Component Design”, 3rd addition, by Juvinall and Marshek, p. 413, if the bolt and nut are of similar material the thread stripping stength will equal the bolt tensile strenth when the nut is .47 * diameter. Standard nuts are 7/8 of a diameter, for comparison.

Interestingly, more than a third of the load is held by the first thread in a nut according to this. As the bolt tightens, its threads stretch and the nut’s threads compress, which reduces force on the far threads.

The .47*dia calculation above takes this imbalance into account, but it will certainly be different for other material combinations. This offers some formula (also found in machinery’s handbook) for calculating the shear area of threads, but it’s uncertain how one would apply that formula given the imbalanced thread load. The Machinery’s handbook suggests at least 3 threads of engagement. We recommend 1 diameter depth for steel and 1.5-2 diameters for aluminum. The referenced formulas may at least provide a rough estimate for sheet metal, where thread engagement is limited. Unbrako’s Engineering guide has several charts showing experimental testing of various sized holes. According to their guide, formulas have performed poorly at predicting thread strength.