All taps are plug type, ground threads from HSS (High Speed Steel), and coarse threads. The H-Limits are as follows: 4-40:H2, 6-32:H3, 8-32:H3, 10-24:H3, 1/4-20:H5. Information at the end of this section describes different tap parameters. Instructions for use: For instructions on tapping along with other metal working basics, watch this video. A brief summary: First, use some sort of oil or cutting fluid, we recommend Tap Magic. While pressing down firmly, make 2-3 complete revolutions. After this, rotate forward a quarter revolution, and then backwards a half revolution to break off chips. If it gets stuck, back all the way out and clear out the chips, never force the tap. You may be able to reverse less often, but be careful. A broken tap can be almost impossible to remove, and usually cannot be drilled out because taps are harder than most drill bits. The most critical part is starting straight. The following picture illustrates the use of a tapping block–a block of metal with holes slightly larger than the tap. This wrench has a hole on its top that can be used as a guide in a drill press by pressing down gently on the quill (2nd pic). 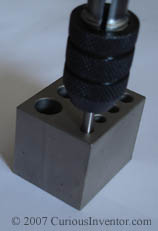 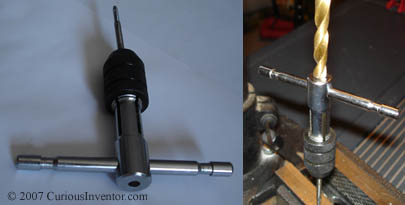 A little about the different varieties of taps: We’ve selected the most commonly needed tap for hobbyists and general work needs, but there are situations when you’ll need something different. The following list describes the main parameters to decide between when choosing a tap:

Be the first to review “Tap and Drill Set” Cancel reply