The part of KiCad that may not be familiar to users of other CAD software is cvpcb. This assigns pcb footprints to components in the schematic. Unlike Eagle, where component libraries contain both schematic and footprint information, in KiCad the schematic version (symbols) of a component and its physical layout (“module”) are stored in completely different libraries, and must be mapped together with cvpcb. It’d be confusing, but you could map a resistor in the schematic to a capacitor’s footprint. 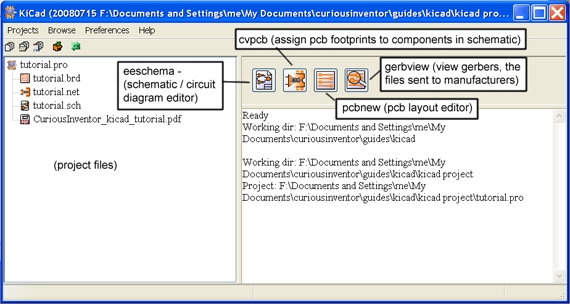 The project file (.pro) contains preferences. For instance: component libraries that should be loaded with a project, trace width setting and drawing colors.

The main project window shows documentation files (like pdfs) as well as board and schematic files.

Making a Blinking LED with a 555 Timer:

Open eeschema (the schematic editor) and click the tool that adds new parts.

Click somewhere in the schematic to open the component selector.

Now click “By Lib Browser” to see a list of all the libraries, their components and diagram previews. You can also type “*555*” (no quotes) and click “OK”, or type some keywords, like “audio” and click “Search KeyWords”. Not all components will have keywords, however.

KiCad actually comes with a large set of pdf spec sheets that you can quickly access by clicking the documentation button.

Repeat the procedure to add a resistor, which is located in the “device” library and called “R”. You can also just type “R” in the “component selector” box.

Make 2 copies of the resistor by holding down Shift and dragging a selection box over the resistor.

Now add a LED (also located in the device library), but before clicking to place it, hit “R” to rotate 90 degrees.

You can also add power or ground connections using the Library Browser and normal Add Parts button–the Add Power button is a shortcut to the Power library.

First, arrange the parts by hovering the mouse over them, and typing “M” or “R” to move or rotate.

Then select the Wire Drawing Tool.

Note: you must start and end wires on the pins of components, it’s not enough that a wire visually connects with a component. For instance, if a wire is drawn between R1 and R3, R2 will not be connected.

Tip: To erase part of a wire, draw back over it.

You can also connect nets and components by applying labels to wires. Just right click on a wire. Labels can be helpful for identifying traces when designing the pcb later on.

Where are the power and ground pins for the 555 chip?

Now you can see pin 1 and 8. Because they are marked as being power pins in the component library, KiCad automatically connects these pins to wires that have power pins labeled VCC and GND. Note: If your select a different power pin, say 9V+, the implied connection won’t work. You would have to unhide the hidden power pins and manually connect them.

You need to number the components before moving on to the pcb layout. Click the Annotate Tool,  set the params, and kicad automatically numbers all the components.

Just double click on the component to change its value.

If you want to delete, add or functionally change a component, it’s best to change the schematic and repeat the entire process again:

If you’re just changing the footprint of a module, for instance, going from a 1/4W resistor to a larger 1/2W, you can make the changes just in Pcbnew (explained below).

As just stated above, make the changes in the schematic using eeschema. We’ll add a 2-pin header for power, and replace the pot with a fixed resistor.

Add the 2-pin connector, wire it up, delete the pot and re-wire a resistor in its place.

Again, save the netlist, and then open Cvpcb.

The new netlist should have two blanks in it now. Assign the module SIL-2 to the CONN_2 connector and another R4 to the resistor. Save the netlist again.

If you just click “Read Current Netlist” in the dialog without changing any options, it adds the two new components, but doesn’t delete the old ones and their stale tracks.

Selecting “Change” and “Delete” under “Exchange Module” and “Bad Tracks Deletion” gets rid of some of the bad traces, but still doesn’t delete module RV1. Had RV1 been labeled R4 before, it would have indeed deleted the module and replaced it with the new R4.

But since RV1 has a different name, the only way to get rid of it is to manually delete it or select “Remove Extra Footprints” under “options.” We can’t select that option, however, because that would delete any modules that are not in the netlist (or the .cmp file), which includes our screw holes.

Changing Just a Module, and Not the Circuit:

This can be done solely in Pcbnew without going back into Cvpcb or Eeschema.

You can either swap out a module for a different one from the library, or actually edit the silk screen and pin layout.

First, right click on a component and edit the footprint.

Type in “R5” or Browse to find a new module, then click “Change Module”.

A new, longer resistor footprint should be in place. Although the netlist didn’t change, another file also used to keep track of modules has: the .cmp file. Next time you run Cvpcb, it will already show a new R5 module mapped to R4. The naming convention is extremely confusing here–R4 is a component label, and R5 is actually a foot print name.

By clicking “Edit Module” in the above Module Properties dialog, you could open up the module editor and actually change the shape and pin arrangement of the footprint. The resulting module would be saved in the .brd file, and not a library (I think).

This won’t go into every detail, but it will cover the unintuitive aspects of creating new components, including how the libraries work.

Both of these libraries can contain from one to many parts.

The most common approach is to modify a component from another library, and then save it in your own custom library.

Let’s change the chip’s name by modifying its properties.

You now have a couple different choices for where to save this newly named part:

Creating a New Library in which to Save the New Chip:

Let’s take the 2nd option, and store the chip in a new custom library that will hold all of our custom schematic symbols.

We save the library as “curious_inventor_symbols.lib” inside the default KiCad library directory.

Two notes:
–The “current library” in LibEdit is still set to microchip.lib, not our new library. So if you were going to make more changes, be sure to switch to your new library before saving anything!
–We now need to update the preferences in Eeschema to load the new library, otherwise it won’t be able to load the chip. We do this next.

Close LibEdit, return to Eeschema and open the preferences.

Add the new library, and then be sure to save the configuration in the main .pro (project) file.

The manual does a good job of explaining how to make new parts. Our only advice is to avoid using the hidden power pins on new parts, and just keep everything visible and connected with wires. It can be especially confusing when you have multiple power levels.

Many of the same ideas apply to making new modules, but the library situation is slightly more confusing.

All about modules (footprints) and their libraries:

What files do I need to send someone else so they can load my schematic and board?

With schematics, they need to have the .lib files that contain the symbols, and those library files need to be loaded in the Eeschema preferences. On the other hand, with boards (.brd files), modules (footprints) can be stored inside the .brd file. You can send someone a .brd file and nothing else, and they would be able to look at and edit the board. However, when you want to load components from a netlist, the module libraries (.mod files) need to be present and loaded in the Pcbnew preferences just as with schematics. Also, it is necessary to load the .mod files in the preferences of Pcbnew in order for those modules to show up in Cvpcb.

If someone sends you a .brd file with modules you’d like to use in another board, you can open the module editor, load a module from the current board, and save or export it into another module library. You can also export all the modules in a .brd file at once via: Pcbnew–>File–>Archive Footprints–>Create footprint archive, which will create a new .mod file with all the board’s modules.

When you make a new component, it asks you for the reference. The reference is the name of the footprint.