Some basics of working with metal along with demonstrations of useful tools. Corrections and feedback appreciated…

Feedback and corrections are appreciated.

A very infomative video for people getting started. I am a machinist myself and can agree with everything you said for hand drilling and tapping.

Thanks. We talked with several machinists to make this, and there was some debate on how often reversing a tap was necessary. Any thoughts? Surely it depends on everything (metal, tap sharpness, cutting fluid, etc), but what do you do in general?

Good videos! I just watched the soldering video before this one, and I have to say I’m very impressed with the accuracy of the information and the quality with which it’s presented.

Jan 11 2008, anonymous said:
Hi Great videos mate, a good idea for filing aluminium is to first rub chalk into the teeth of the file, it embeds into the teeth and makes cleaning the file a whole lot easier,( and maybe stops you getting abused if you are using someone elses tools) This is probably the best site I’ve found for soldering advice , well sourced and professionally presented.Thankyou and regards
Gary
Jan 27 2008, anonymous said:

I’m very impressed by your Metal Working video. Looking forward for your next online video’s on this subject!
Question: Do you ship to the Netherlands?

Keep up the good work!

yep, just follow the instructions on the check page. we can’t ship flux or batteries, though.

You did a great job with this video. I am a machinist and have found everything you described to be very accurate and useful for the basics of drilling a hole.

The video has a lot of information for the beginner, but the beauty of online videos is that you can slow them down and watch them over and over. Keep up the excellent work!

To echo Daletone’s comments, I have been a machinist for 22 years and I am impressed with your metalworking video. Excellent job. I came here for your soldering information, so I imagine it is of the same quality.

Regarding reversing the tap: This is on the conservative side, especially for Al. But in the home shop environment it definitely pays to be conservative.

Thanks for a great site!

This set of tutorials will cover some essentials to designing circuits and pcb layouts using kicad (link goes to author’s site + download), an open-source tool for circuit (board) design that’s free and has no restrictions on number of layers or size (like Eagle). We’ll focus more on the unintuitive things as well as tips & tricks rather than re-write the manual. 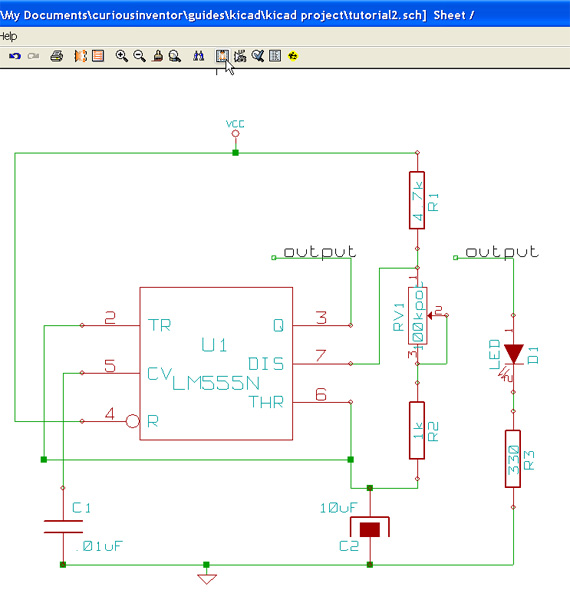 You’ll probably want to adjust the grid size before moving anything. The pull down contains the user grid size as well as several sizes listed in mils (thousandths of an inch).

When you first read a net-list, all the components will come in on top of each other.

Start off by moving the whole pile of components by drawing a selection rectangle around them and then click in the middle of the sheet.

Pcbnew will automatically unpile the components. First, enable the automatic mover by clicking the “Mode Module” button in the top toolbar. Then right click and select “Move All Modules”. Pcbnew also has an “auto placer,” which is different in that it tries to minimize the length of the connections between the modules (the ratsnest). You can fix components to prevent them from being moved by either command.

Continue moving components around by hovering the mouse pointer over them, and then pressing “m” or “r” to move or rotate.

Rats Nest (show rubber bands where all connections should be):

UnDo… not yet, but there is an UnDelete:

It’s pretty easy to accidentally delete an entire track, so this is actually very helpful. Unfortunately, there is no general purpose undo that I know about.

One of the quirks of KiCad is that you can’t just drill a hole, you need to make a one-pad component that has the right sized hole for your screw. The module called “1PIN” is the right size for a 4-40 screw.

Place the screw hole and repeat for the other 3 corners.

For a 2 layer board, you would commonly want files that represent the metal on the top and bottom (component and copper, respectively), top and bottom solder mask (the green stuff), the top silk screen, the board outline (edges), and a drill file (click “Create Drill File” in addition to “Plot”).